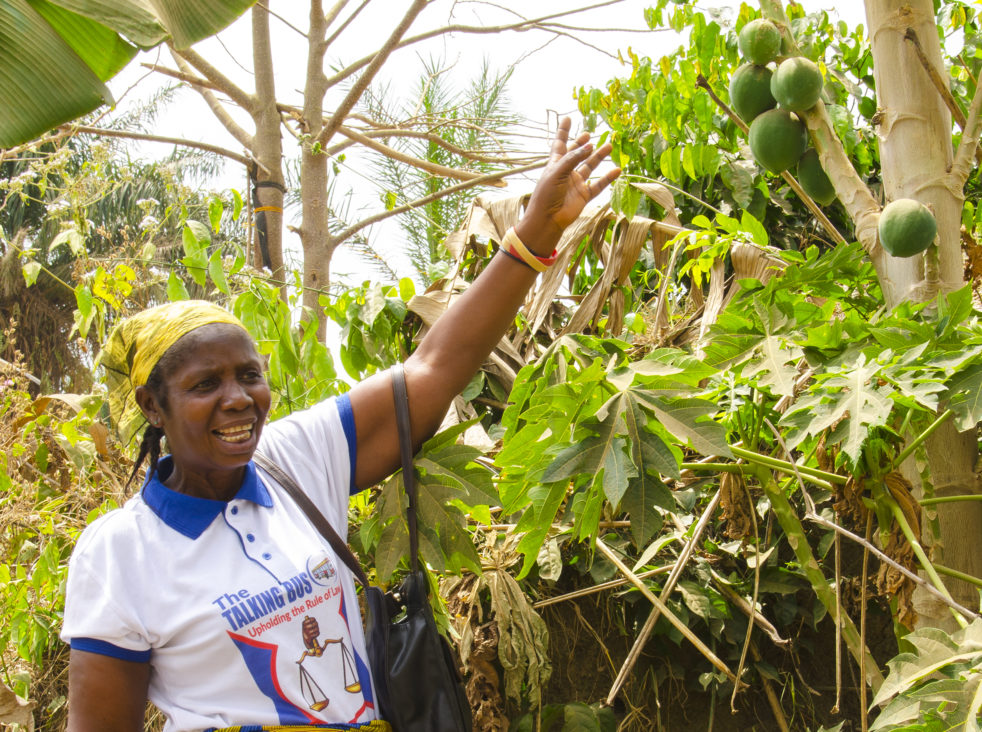 Liberia in the 1990s was a place of turmoil, host to a brutal civil war that would kill at least 250,000 people and leave many thousands more displaced.

The war uprooted Martha* from her farm in Lofa County. Her husband, Joseph, was a rebel fighter aligned with one of the factions vying for control, and had taken her and the couple’s four children away from the family’s land, to a city closer to the rebels’ base.

On the day in 1996 that he was killed, Martha felt her own life slipping away.

“I wanted to die that day,” Martha says. “Nobody was there to help me take care of the children – it was me alone.”

If that had been the end of Martha’s story – widowed by war and left to raise four children alone – it might have been enough of a tragedy. But a further injustice awaited her, one that would rob Martha of her means of livelihood — the land she had shared with her husband. As we commemorate the 2018 International Women’s Day and its pledge to “Press for Progress” for women’s rights, Martha exemplifies some of the inequalities that too many women confront.

Today, Liberia is a country in transition, still recovering from the civil wars of 1989 – 2003, the years of political tumult that preceded them, and the more recent terrors of the West African Ebola epidemic of 2013 – 2016.

In January, the country elected George Weah as its president, marking the first peaceful, democratic transition of power since 1971. His predecessor, Ellen Johnson Sirleaf, had become Africa’s first female head of state when she was elected in 2005, following the ouster of warlord Charles Taylor.

But the symbolism of Sirleaf’s presidency could only reach so far, and many of Liberia’s women are still waiting for gender equality.

When it comes to land and inheritance rights especially, Liberia’s women face pronounced discrimination. More than half of Liberia’s 4 million people live in rural areas, where patriarchal traditions and customary law govern in practice. As part of customary marriage tradition in most of Liberia, a husband must pay a “bride price” to the family of his bride. In some areas, for example, this has been fixed at $48, the modern-day equivalent value of two cows. This tradition lends to the feeling among many that women are property within a marriage and, as such, cannot have rights to land.  As people in rural communities explain, “Property cannot own property.”

Inadequate or nonexistent protections for women’s land rights are not unique to Liberia. Indeed, in more than half the countries in the world, women face barriers to their land and inheritance rights by law or custom. Weak or limited governance and gaps in implementation are commonplace; for instance, though all 48 countries in sub-Saharan Africa refer to gender equality in their constitutions, only 20 have laws on the books that specifically protect women’s rights to land.

In Liberia, the legislature is currently debating a Land Rights Bill that, if enacted, could extend formal legal protections for customary land to the communities that occupy this land. The bill provides an opportunity to promote gender equality and strengthen the rights of women like Martha.

After Joseph’s death, Martha returned to her farm, where she lived with her in-laws. There was a stand of rubber trees that she and her husband had planted before the war, and the harvests became her primary source of income. Life continued that way for years — it was difficult, but it seemed that Martha’s story might prove to be an exception to prevailing notions about women’s land and inheritance rights.

It was around 2011, Martha says, that things began to change. Her husband’s brother, Franklin, took an interest in her rubber trees. Years earlier, he had proposed marriage to her – in Liberia, it’s common for a surviving male relative to marry the widow of a family member, particularly in the case of customary unions.

Martha declined. But Franklin continued to come around, and to ask about her rubber trees – how to tap the trees to collect the sap to be harvested. So she taught him, not knowing what it would cost.

From that moment, Franklin claimed the trees as his own. He began to harvest the rubber for himself, refusing to share any of the profits with her.

Martha protested – it was she and her husband who planted the trees, and she alone who had been tapping and selling the rubber in the years after his death. Why should her brother-in-law now take them from her?

“It is my labor – my husband and I planted this rubber, not you or your people, so why do you say I don’t have a share?” Martha says. “I taught you how to tap this rubber.”

So Franklin offered her a bargain – Martha could continue to harvest the rubber as before, and in exchange, she would marry him.

But, “If you don’t marry me, the rubber is no longer yours,” Martha recalls him saying.

She appealed to the rest of her in-laws, hoping for justice. She had been living among them for more than 15 years – surely they would support her claim to the trees she had been harvesting all that time?

“Because she’s a lady, she’s not entitled to property,” her in-laws concluded – a common refrain in Liberia.

For Martha, it was the undoing of years of labor, both her husband’s and her own.

“Me and my husband planted — we struggled to plant those rubber trees,” Martha says. “Then, they just took the rubber away from me.”

She sent her oldest son back to the rubber farm, to claim it as his own – as his father’s oldest male heir, Martha’s son would traditionally have claim to the land. He, too, was chased away.

Today, Martha lives in Nimba County, where she farms a small piece of land her son bought for her. In some ways, Martha is lucky – her son had the means to help her earn a living. But, like so many women in the developing world, the means of that livelihood – her right to land – is contingent upon her relationship to a male relative.

On her son’s land, Martha is growing some staple crops, including cassava and corn, as well as melon and pineapple. She’s saving to build a house on the site, and is setting aside some of her income to help pay school fees for her two grandchildren.

But she laments the years of lost income from the rubber farm that was stolen from her.

“It’s not fair – women are human beings, too,” Martha says. “They should have access to land and property.”

To Liberia’s lawmakers, currently debating a national land reform bill, she has one message: protect the land and inheritance rights of women like her. Only when women can own property – and are not seen as property – will Liberia be able to move toward greater equality for Martha and for hundreds of thousands more.

* Names have been changed.