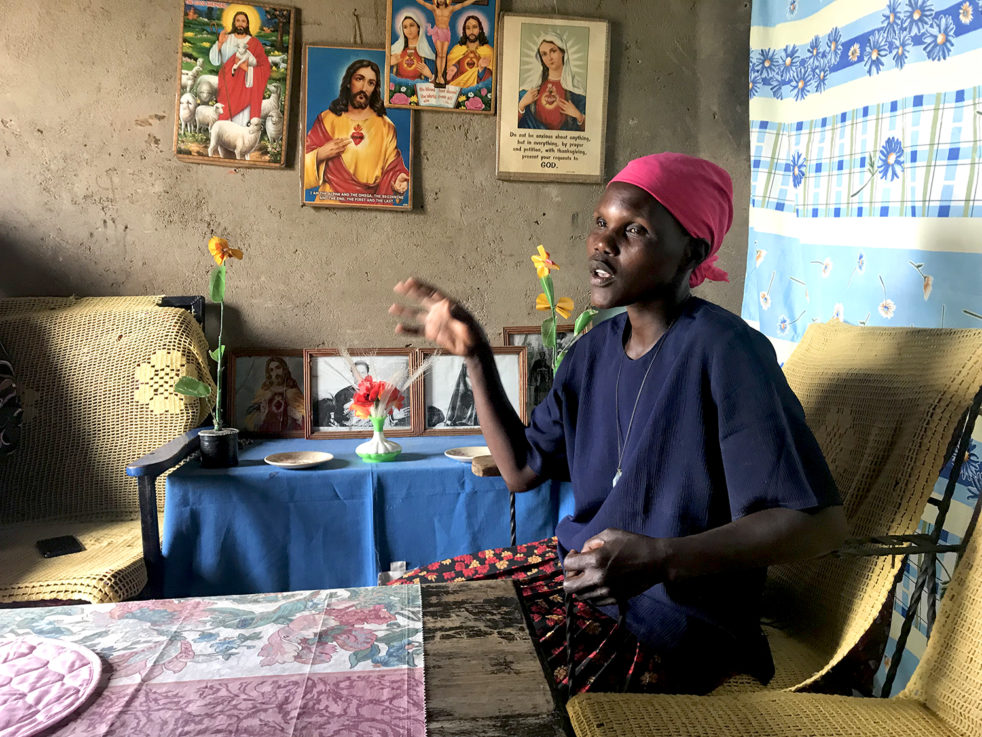 This blog post is part of a series focused on women’s voices from the grassroots and their experiences fighting for and securing land rights for women. This blog post was originally published by Place, an initiative by the Thomson Reuters Foundation.

Louise Achieng Juma’s life changed abruptly in 2012 when her husband Yusuf was tragically killed in a car accident. Pregnant and mother to six other children between the ages of two and fifteen, Louise was left to fend for herself.

Devastated by the loss, at least she had the land on which to grow crops and shelter her family. Or so she thought.

One year after Yusuf’s death, Louise’s eldest brother-in-law insisted she be ‘inherited’, a customary practice of the Luo people who form a majority of the population in Kisumu County in western Kenya. Traditionally, widow inheritance meant re-marrying an in-law whose role was to provide for and protect the family.

This tradition has been corrupted by a new concept known as ‘widow cleansing,’ which involves unprotected sex with an in-law to cleanse a woman of the evil spirits that claimed her husband’s life. Thereafter, the widow is expected to be inherited, whether she likes it or not.

Louise refused. In response, her brother in-law said she would bring a curse upon the family, demolished her house, claimed her land, sold her belongings and sent her and her children away.

Frantic, she found a small one-room house near the local market, where she now lives with her seven children. She found work as a day labourer weeding farms and selling charcoal and mandazi (doughnuts) to support her family. She still couldn’t afford to pay the 500 shillings (USD $4.90) monthly rent, let alone pay her children’s school fees.

It also recognizes culture and customary practices, but only those which don’t discriminate and/or do not infringe on protected rights. However, the constitution rarely reaches communities where people continue to carry out customs that violate women’s rights – especially to land and property – due to this disconnect between law and practice.

Since time immemorial, communities across Kenya have put in place mechanisms to resolve disputes arising in families and the community. These mechanisms work, as members of the community respect and revere the elders in charge of the traditional processes.

We began the project more than a decade ago after learning how widespread the problem was in the region of Kenya where we work – Kisumu and Homa Bay counties – which suffers one of the highest HIV/AIDS rates in the world.

Elders were trained to mediate cases of widow disinheritance while guiding the community on how the culture and the law protect women’s property rights. The project has reconstructed the community based ‘courts’ or arbitration barazas (forums), making justice easily accessible and affordable for the rural population who live far from the courts.

This model for access to justice has worked over the last 11 years with nearly 700 cases resolved by the Luo Council of Elders so far. This is a remarkable turnaround time for these dispute cases that are mostly resolved within three to six months as opposed to two years or more in the courts.

In 2016, Louise’s disinheritance case was resolved after a widow champion connected her with local elders. Her in-laws came to understand and accept that Louise has the right to inherit her husband’s land, and although she doesn’t yet have the funds to rebuild her home, she has free, safe access and control of her land. She has been cultivating it to provide food for her children, selling extra crops to earn income to sustain her family.

Scaling a model that works

There is an urgent need to scale-up the best practice of using alternative dispute resolution mechanisms to advocate for the protection of the rights of women to own and inherit property across the country, and the wider region, while ensuring that cultural practices conform to human rights principles and the laws in place within a jurisdiction. This approach to justice is cost and time-efficient, effective and most importantly, transformational for women.

The Kenyan government has recently formed a task force to develop an Alternative Justice Systems policy which seeks to operationalize the traditional justice mechanisms conducted by the elders. This will see the formal recognition of decisions made by the elders and repercussions for failure to comply with their written mandates.

This is an important first step.

At KELIN, we have seen first-hand this model improve the lives of hundreds of women and their children. Louise is proof. It has also helped keep the peace in communities and freed up time and resources to be spent on education, building businesses and family health and nutrition.

Investment and action to scale this model across Kenya – and in countries across the region – is paramount so that thousands, if not millions, can benefit.

Jessica Achieng Oluoch is a lawyer and peer educator at KELIN, where she is responsible for promoting and protecting women’s land and property rights.

This blog post is part of a series for the global Stand For Her Land Campaign – of which KELIN is a member – featuring a diversity of voices on the fight to secure land rights for women on the ground, in their daily lives. You can watch a teaser of an upcoming Sundance Institute-funded documentary featuring KELIN’s work in Kenya here. To help Louise and her children rebuild their home, please visit M-Changa.