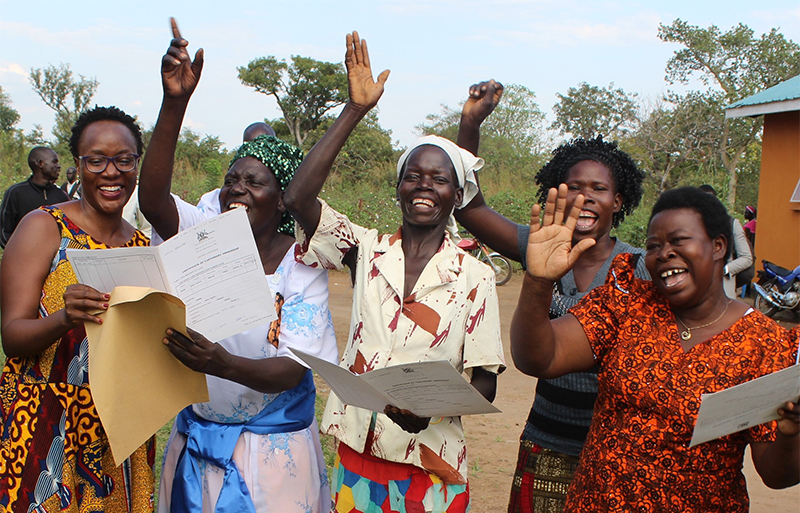 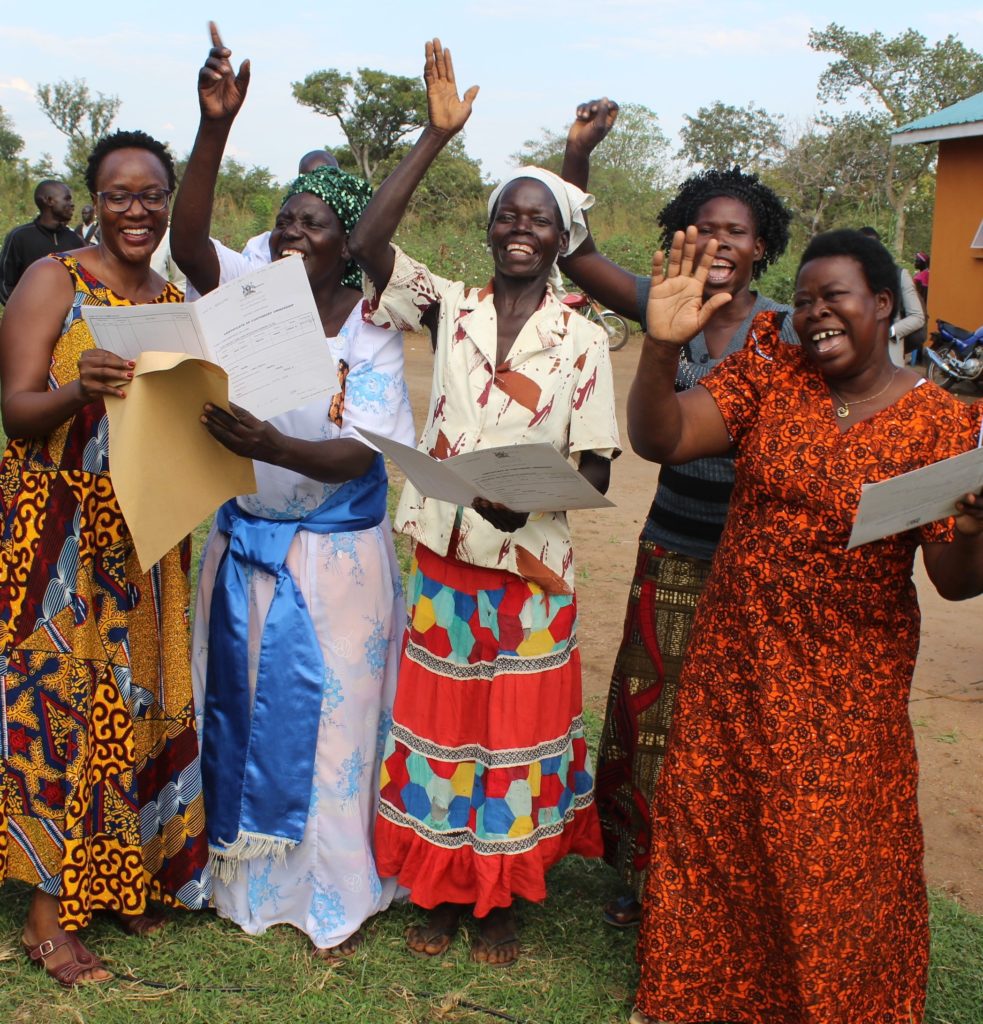 Santa (in blue sash) and the author (far left) celebrating Santa and other women who just received their land certificates.

Life has been tough for Santa Otyeka, a subsistence farmer living in Northern Uganda. Since the death of her husband in 2002, she has relied on the land that her husband left behind to fend for and sustain her children and other dependents. Although it hasn’t been easy, she has managed to support her family by growing beans, cassava, maize and vegetables, and grazing livestock for milk production on the land in Owele East Village in Pader District.

Life for Santa and her children would have been less of a challenge if she didn’t have to live in constant fear as she struggled to protect her major source of livelihood: her land. Six years after her husband died, her brothers-in-law returned from the internally displaced camps where they had lived for several years, uprooted by the brutal civil war with the Lord’s Resistance Army that devasted northern Uganda. Little by little, Santa’s in-laws fenced off and occupied portions of her land until finally they forced her off altogether, claiming she had no rights to the land in their Acholi culture. It is because of women like Santa that we are starting Stand For Her Land in Uganda.

Land laws in Uganda – specifically the 1995 Constitution and Land Act – provide for equality between men and women, in respect to the acquisition and holding of land. They accord equal property rights for men and women before marriage, in marriage and at its dissolution, and emphasize the duty of the state to respect, protect and promote these rights. Furthermore, the laws prohibit all customary laws, practices, or traditions which undermine women’s dignity, welfare, interest and status.

However, like Santa, many women in Uganda are still generally unable to own or inherit land. This is because community members have little knowledge of the laws that protect women’s land rights. But even when they do, deep-seated customary laws and practices continue to override statutory law in recognition and enforcement of women’s land rights, leading to land grabbing and disinheritance of women’s land and property by the family. Insufficient capacity to implement and enforce these rights on the ground compound this already challenging situation, ultimately creating a deep disparity between law and practice that makes it extremely difficult for women to assert their equal rights to inherit land and property due to lack of enforcement and implementation of existing laws and policies.

Santa tried to seek support from the clan leaders, who endeavored to mediate between her and her in-laws, but due to the deeply rooted discriminatory beliefs and practices, this did not yield any lasting solutions for Santa and her children. She even tried to seek justice from local (male) government leaders, who ultimately sided with the in-laws whose power in the community is much greater than hers.  As products of their culture, these men also hold discriminatory beliefs against women’s land rights – and were equally unaware of Uganda’s land laws despite their responsibility to administer land.

Santa was losing hope when she attended a community sensitization event in her village organized by my organization, Uganda Community Based Association for Women and Children’s Welfare (UCOBAC) in partnership with UN Habitat – Global Land Tool Network (GLTN), that aimed to raise women’s awareness of their rights as mandated by Ugandan law. More specifically, we educate families and communities about women’s and girls’ rights as it relates to Certificates of Customary Ownership (CCOs).  Typically, only the male head-of-household’s name will appear as the owner, and only the sons will be listed as occupants, effectively evaporating their wives’ and daughters’ rights to inherit the land and property. We are educating communities and encouraging families to include the names of both men and women, as well as daughters and sons, on the CCOs – and empowering widows and other women-headed households to obtain the certificates in their own names. 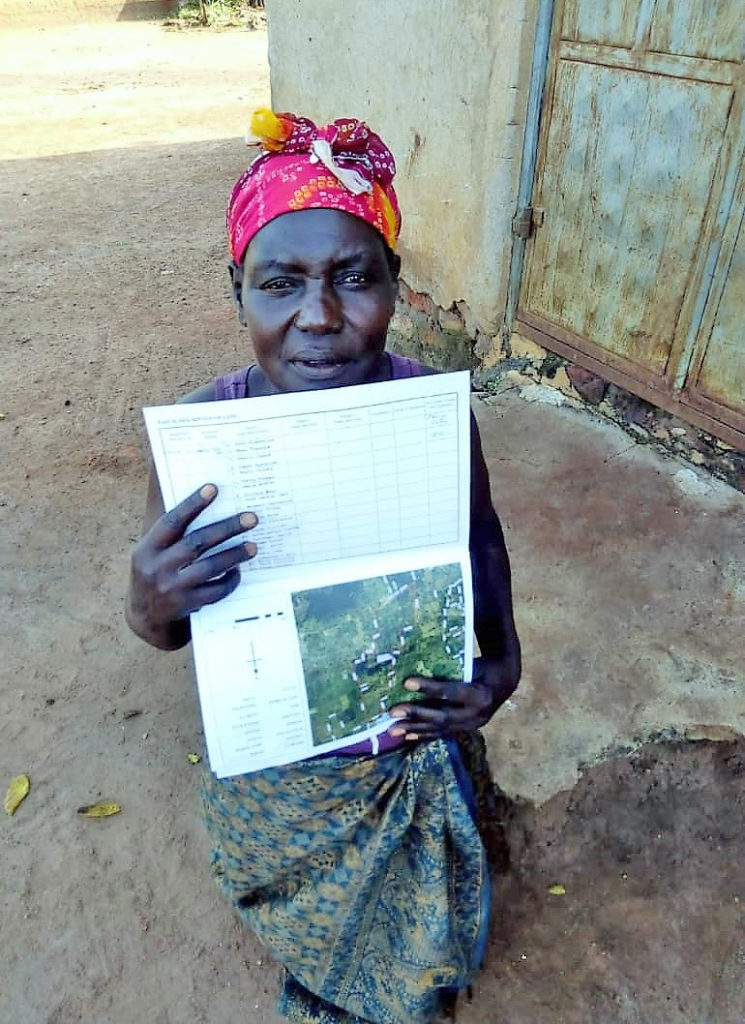 Santa, showing us her land certificate.

Santa jumped at this opportunity as her last arrow of hope to protect her land and secure her family’s future. Through this program she applied for registration, had her land boundaries mapped, and a second – and successful – mediation was held with her in-laws. Now that she has her CCO, she feels more secure on her land and better protected from further land grab attempts by her in-laws – or anybody else.  Furthermore, with her CCO as collateral, she has been able to secure a bank loan and is now expanding her farming activities. As a result, she is able to provide health care, education and food for her children and grandchildren. She is more at peace, more productive on her land and is confident that her family will have a secure future.

It is however important to note that Santa’s success story is an isolated story. These interventions need to be scaled, and implementation policies and practices need to be strengthened so that millions more women like Santa can obtain their CCOs and assert their equal rights to land. Because so many women continue to have their land rights violated, especially at the family and community level. The COVID-19 pandemic and its associated restrictions have only worsened the plight of women in Uganda, as in all over the world. Here in Uganda, cases of domestic violence against women have skyrocketed during this period and many of these women are farmers vital to food production. Many families, especially female-headed households are being evicted from their land. Unfortunately, access to justice is now even more difficult than ever due to the crisis.

To bring about widespread change, we must take collective action to advocate for solutions that will bridge the expansive gap between law and practice and end this cycle of abuse and vulnerability. This is why UCOBAC is joining the Stand For Her Land Campaign, whose mission is just that. By working alongside many of our civil society and grassroots partners in the country, we aim to begin building a united, inclusive and sustained push to accelerate progress as part of S4HL. Late last year, I worked with the S4HL Secretariat to convene some 20 diverse organizations in Kampala, that all share a vision on the transformation that can happen when women can assert their equal land rights in their daily lives. Together, we analyzed, strategized and ultimately realized that S4HL will add important value to moving the needle on strengthening women’s land rights in Uganda.

By raising our voices together, by pooling our diverse strengths and expertise, we will be able to take head on the social norm and structural barriers that stand in the way in Santa’s Pader District and across the country. Only through coordination and collaboration, will we turn Santa’s story into the story of all women – and the family’s they support – in Uganda.

Frances Birungi-Odong is the Director of programs at Uganda Community Based Association for Women and Children’s Welfare (UCOBAC).